This And That: Beatles Style

After featuring some of The Beatles' solo Forgotten Hits this week, we figured we'd wrap things up with some of the cool stuff you guys sent us ... along with a few other goodies.


re:  DON'T MISS THE LABOR DAY 500:
The list officially hits the web this morning ... check it out to see where your favorites came in!  (Ron Smith has been tabulating this list for ages now ... and it's an honest and accurate portrait of oldies music fans' favorite tunes.  Votes come in from literally around the world!)
I think it's pretty safe to say that there aren't very many surprises in most of The Top 11 ... "Hey Jude" by The Beatles, "Satisfaction" by The Rolling Stones, "American Pie" by Don McLean, "Like A Rolling Stone" by Bob Dylan, "In The Still Of The Night" by The Five Satins, "Rock Around The Clock" by Bill Haley and the Comets", "My Girl" by The Temptations and "Oh, Pretty Woman" by Roy Orbison all seem to do well on these types of list year after year after year ... and, as such, are also regular oldies radio mainstays ... but check out #12!!!
"Ame Caline" ("Soul Coaxing") by Raymond LeFevre?!?!?
Actually, Ron tells us that this song has ALWAYS done well on his chart, probably due to so many foreign readers ... but when this song was first released back in 1968, it never climbed higher than #36 on the national charts.  The Beatles placing THREE songs in The Top Ten were a bit of a surprise ... (besides "Hey Jude", you'll also find "I Want To Hold Your Hand" and "Get Back" there) ... and "I Feel Fine", "Yesterday" and "She Loves You" join these three in The Top 20, giving The Fab Four an incredible 30% of The Top 20 Favorite Tunes!  By comparison, you won't find a single Elvis Presley tune posted there.  (Elvis makes his first Labor Day Chart Appearance at #26 with "Can't Help Falling In Love".)
Sadly, nobody's counting down the list this weekend ... this would be a fun bit of radio to listen to ... but you can check it out in its entirety right here:
Click here: Oldies Music - Labor Day 500
re:  THE BEATLES:
>>>Geez, it was 47 years ago tomorrow that the Beatles played Red Rocks just west of Denver.  My Big Sis Sharon saw their limos outside the Brown Palace Hotel in downtown Denver! She was a Senior at Cathedral High School and was walking to the buses in downtown Denver when she saw the Beatles.  Where were you on this date 47 years ago in Denver? I was a Freshman at Regis H.S. and unhappy as hell that I was in a school with NO WOMEN! But I had bought a Beates Wig that I wore to school daily and finally gave to a Speech Teacher there!  Denver is celebrating the fact ... please turn to KRWZ Cruisin Oldies 950 in Denver to hear all the BEST of the Beatles from 47 years ago this weekend!  (Wild Bill Cody)
Kent,
I saw your message about the Beatles special next week.  Anything you are looking for?  Surveys, etc?  Here are a few items I already had as scans on my computer, many from my collection.  FH star Hy Lit with Beatles, "Something New" ad, WCFL 1966 concert flyer for Beatles' visit, some Beatles memorabilia (I used to collect ALL of those Beatles pins from those little knob turning vendor things that we still see in stores today), A Dusty Rhodes DJ Beatles club card (Dusty began 50 years ago on Cincy radio and has been a good friend for decades), Triangle Productions' ad for the Beatles 1966 Chicago concert, get your Beatles towels!!, the wrapper to those Beatles bubble gum cards.  Those cards were VERY important to me back in 64/5.  I used to spend nickels galore on these card packs.  I still have a shoe box full of 'em.  Suddenly, I had to decide in those days, when I would visit Woolworth's in Dodge City, between buying baseball cards or getting Beatles cards with five cards and a flat piece of bubble gum inside.  Funny, I no longer have the baseball cards!  More coming ...
WLSClark 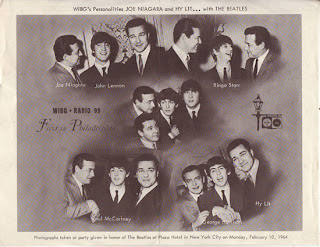 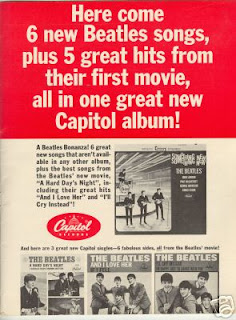 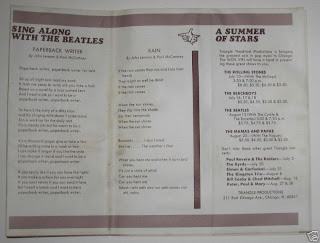 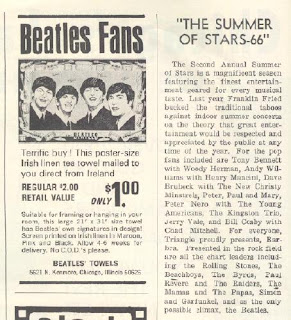 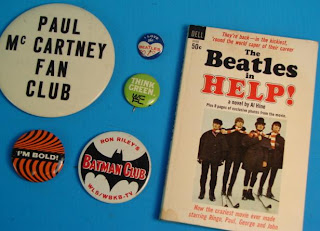 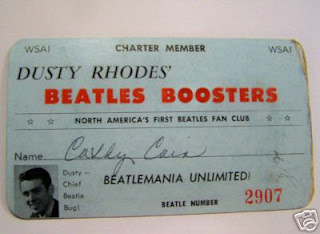 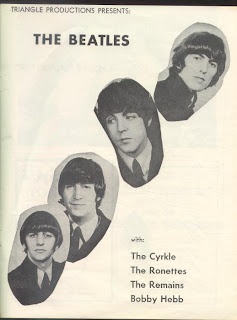 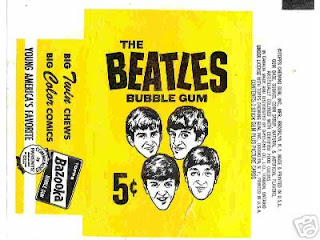 At one time I had a complete set of those Beatles cards, too ... the black and white ones AND the color ones that came out a year later.  Had the pins and buttons ... and I think I still have MY copy of that "Help" paperback book around here somewhere, too!  The little plastic dolls and the blow-up dolls ... all kinds of stuff that today you'd have to pay a small fortune for to pick up again.  All the old 16 Magazines (and Beatles Spectaculars) ... yep, they certainly were a money-making machine for an awful lot of people (if not always themselves!)  Thanks, Clark!  (kk)
More ... Beatles 1966 Cleveland WIXY concert ticket (HEY, I just realized I worked on CD reissues by two of the Beatles' opening acts from the '66 tour, the Remains and Cyrkle!),  Denver "Help!" movie ticket, (Wild Bill comments about the Beatles concert in Denver.  Would you like to see KIMN chart from then?),   Dan Donovan of WMEX Boston (station Lujack came from when heading to 'CFL and a decades long stint on Chicago radio) stating that the Beatles run might be thru -- IN APRIL, 1964!!.  Freddie Lennon photo.  KC 1964 Beatles ticket.  Charlie O'Finley, owner of the KC Athletics baseball team (later Oakland A's), wanted the Beatles to perform onstage in A's uniforms!!  Did NOT happen!  I have WHB KC concert contest audio for the event.  KILT Houston concert ticket.  This entire concert has been recorded and bootlegged.  A 1963 Tommy Roe / Beatles poster.  Butcher cover Capitol document.
Clark Besch 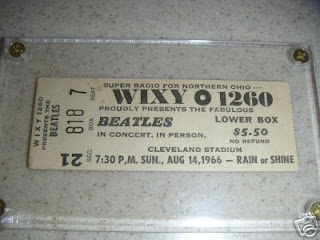 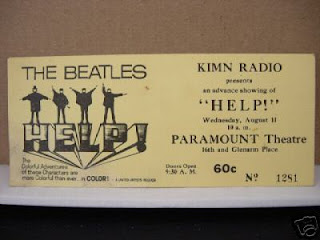 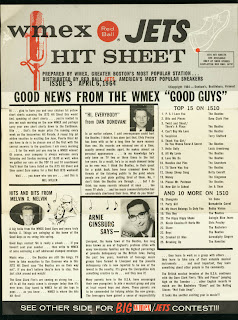 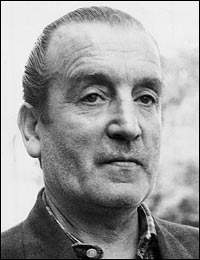 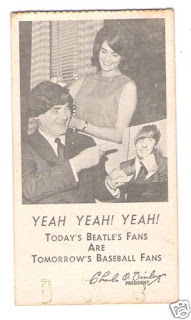 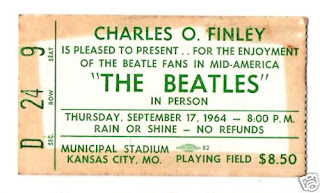 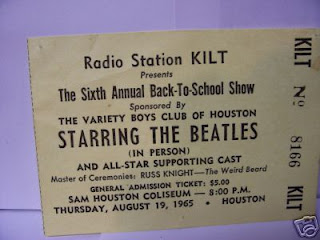 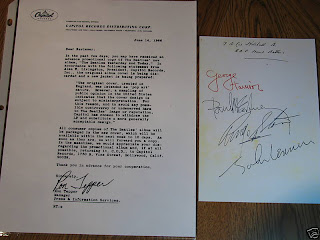 Happy Birthday FirstName from 94.7 WLS-FM!
Thanks, guys ... the sincerity of your message really hits home with me!  (kk)
Dashing out the door ... but it looks like we've already received enough comments to fill the entire holiday weekend ... so be sure to check back for more all weekend long!  Have a nice, long weekend!  (kk)
Posted by Kent Kotal at 6:52 AM