Thanks to FH Reader (and mega-promoter) Bob Merlis, we had the golden opportunity to view the brand new Hollies DVD, "Look Through Any Window, 1963 - 1975", six weeks before it will be available to the rest of the world through Reelin' In The Years Productions and Eagle Rock Entertainment ... and I've got to tell you ... this film is nothing short of OUTSTANDING!!! 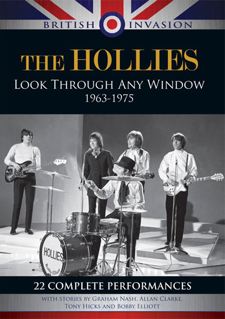 
Not really part of the "first wave" of The British Invasion, The Hollies first caught our attention here in The States in early 1966 with their break-through US Hit "Look Through Any Window", which reached #32 on The Billboard Hot 100 Pop Singles Chart.  (It had a far better showing here in Chicago where it soared all the way to #3 ... and still gets a fair share of airplay.)


What most folks probably don't know is that The Hollies already had six British Top Ten Hits before they broke through with their first hit record here in America, including the #1 Hit "I'm Alive" and "Yes, I Will", a #9 Hit in 1963 that would be covered by The Monkees four years later as "I'll Be True To You".  It's fun to watch the group develop both in look and in sound from these early clips (with their piled-high Everly Brothers pompadours and suits) to a more relaxed, hippie-dom state later in the film ... it's a chance to witness first hand a complete musical and cultural evolution from start to finish.

This new Hollies DVD Production begins by offering selections from the earliest days of their success in Great Britain, featuring some songs that most of us won't be familiar with ... but then explodes with a virtual hit-barrage once their success expands worldwide.  Most remarkable about all of this is the INCREDIBLE sound and video quality of these clips ... we were blown away by the clarity of some of these performances, some of which are now well over 45 years old!

Holding the whole thing together are in-depth, current day interviews with Graham Nash, Allan Clarke, Tony Hicks and Bobby Elliott, all of whom offer loving, behind-the-scenes reflections in complete candor.  (In fact, when this film has its first official world-wide premier at the American Cinematheque's Aero Theatre in Santa Monica, California, on September 22nd, both Nash and Clarke will be on hand to take part in a panel discussion immediately following the screening!)

The stories behind the songs are especially entertaining.  (Without giving too much away, we learn that Tony Hicks did most of the song-searching, visiting publishers to see what they had to offer in the way of new material ... but along the way, the band also developed into quite successful songwriters in their own right ... the story behind "Stop Stop Stop", a Top Ten Hit for the band in 1966, is hilarious ... and we also learn that another Top Ten Hit, "Carrie Anne", first saw life as "Marianne" ... as in Marianne Faithfull ... whom all of the members of the band seemed to have a HUGE crush on ... they just didn't have the guts to leave her name in the song!!!)


About two-thirds of the way through, we are also allowed a behind-the-scenes look at Abbey Road Studios to watch a remarkable film of The Hollies recording their soon-to-be smash hit "On A Carousel".  Viewers are treated to a fly-on-the wall perspective, as they put the song together layer by layer with guitarist Tony Hicks and drummer Bobby Elliott each adding their parts to the backing track, followed by Graham Nash (and then Allan Clarke and Tony Hicks) dubbing on their musically unadorned vocal tracks.  It's nothing short of remarkable, and it's all there to enjoy in crystal-clear sound and video.  There are also specially filmed video clips of the band doing "Dear Eloise" as well as a made-for-this-DVD montage of home movies that now accompany "King Midas In Reverse", two of their lesser-known hits.  (While The Hollies may be best remembered for their impeccable and inventive harmonies, it's interesting to see just how much they experimented along the way, changing up there sound from record to record, always challenging themselves to grow musically.)


All the hits are here and well represented, and most are presented in a live setting (along with a few vintage "live" television performances.)  One of my favorites is seeing The Hollies performing "Jennifer Eccles" at The Split Festival in Yugoslavia, dressed in tuxedos and clowning it up a bit as the song at various times is both falling apart and spot-on vocally.  Talk about your Forgotten Hits, "Jennifer Eccles" only made it to #40 back in 1968 but, to my ears, has always been one of their most infectious tunes, reaching #15 here in Chicago that year.

Graham Nash's leaving the band (to form Crosby, Stills and Nash) is addressed, again in complete candor by all of the members of the band ... and even Graham himself gets off a great line about watching his old band climb back into The Top Ten on the charts without him thanks to the timeless classic "He Ain't Heavy, He's My Brother" in 1970 ... while Crosby, Stills and Nash were simultaneously also enjoying their earliest chart success.
A couple more "comeback" hits followed ... "Long Cool Woman (In A Black Dress)" went all the way to #1 in 1972 ... and two years later The Hollies were back in The Top Ten with "The Air That I Breathe", a song written by Albert Hammond that they discovered when they heard Phil Everly's solo version of this tune ... not the first time that The Everly Brothers inspired the band!
One thing is clear as you watch this film ... The Hollies were able to take ANY style of music and adapt it to their own, making it "The Hollies Sound" in the process.  (It's particularly enlightening to hear that they stumbled across the third part of their trademark harmonies quite by accident!  Just another quirky happenstance that helped to identify the band!)  They were FINALLY inducted into The Rock And Roll Hall Of Fame in 2010, after being ignored the first 22 years of their eligibility ... and this film simply reinforces their rightful place there.

Recommended for even the most casual Hollies fan, "The Hollies: Look Through Any Window, 1963 - 1975" is BY FAR the strongest release yet in Reelin' In The Years Productions' British Invasion Series thus far (which also includes spotlight features on Gerry and the Pacemakers, Herman's Hermits, Dusty Springfield and The Small Faces.)  While more releases are planned, no official release dates have been announced.  That being said, DON'T miss your chance to pick up this great Hollies DVD on October 4th ... you won't regret it.
kk
Kent Kotal
Forgotten Hits
Posted by Kent Kotal at 6:16 AM