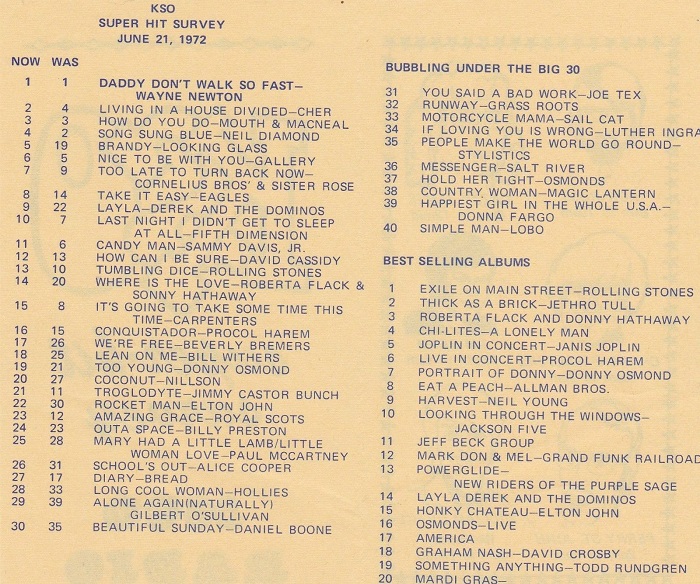 Some nice surprises on this week's chart from KSO in Des Moines, Iowa ...

Wayne Newton's on top (for at least the second week in a row) with "Daddy Don't You Walk So Fast," a GREAT Forgotten Hit from '72.

Right behind him is fellow Las Vegas attraction, Cher, with "Living In A House Divided."  Her #2 showing is 20 places higher than this record peaked in Billboard.

And yet there's plenty of room for variety throughout this week's Top 30 ...

Derek and the Dominoes are in The Top Ten with "Layla" ... Mouth And MacNeal are at #3 with "How Do You Do" while David Cassidy sits in the #12 spot with his remake of The Rascals' tune "How Can I Be Sure."

Within The Top 20 we see The Rolling Stones, The Carpenters, the elusive second hit single by Beverly Bremers that we talked about earlier ("We're Free"), Procol Harum, Donny Osmond and Nilsson!  (Man, radio was great back then ... everything just FIT!)

It's a nice surprise to see BOTH sides of Paul McCartney and Wings' new single "Mary Had A Littel Lamb" and "Little Woman Love" charting ... and the Bubbling Under list has some interesting titles as well.

Plus, as we've seen throughout the year so far, Best Selling Albums are making most of these lists now.  The Rolling Stones, Jethro Tull, The Allman Brothers Band and Janis Joplin all have LPs in The Top Ten ... as do polar opposites Donny Osmond and The Jackson Five!  What a great time to be listening to the radio!