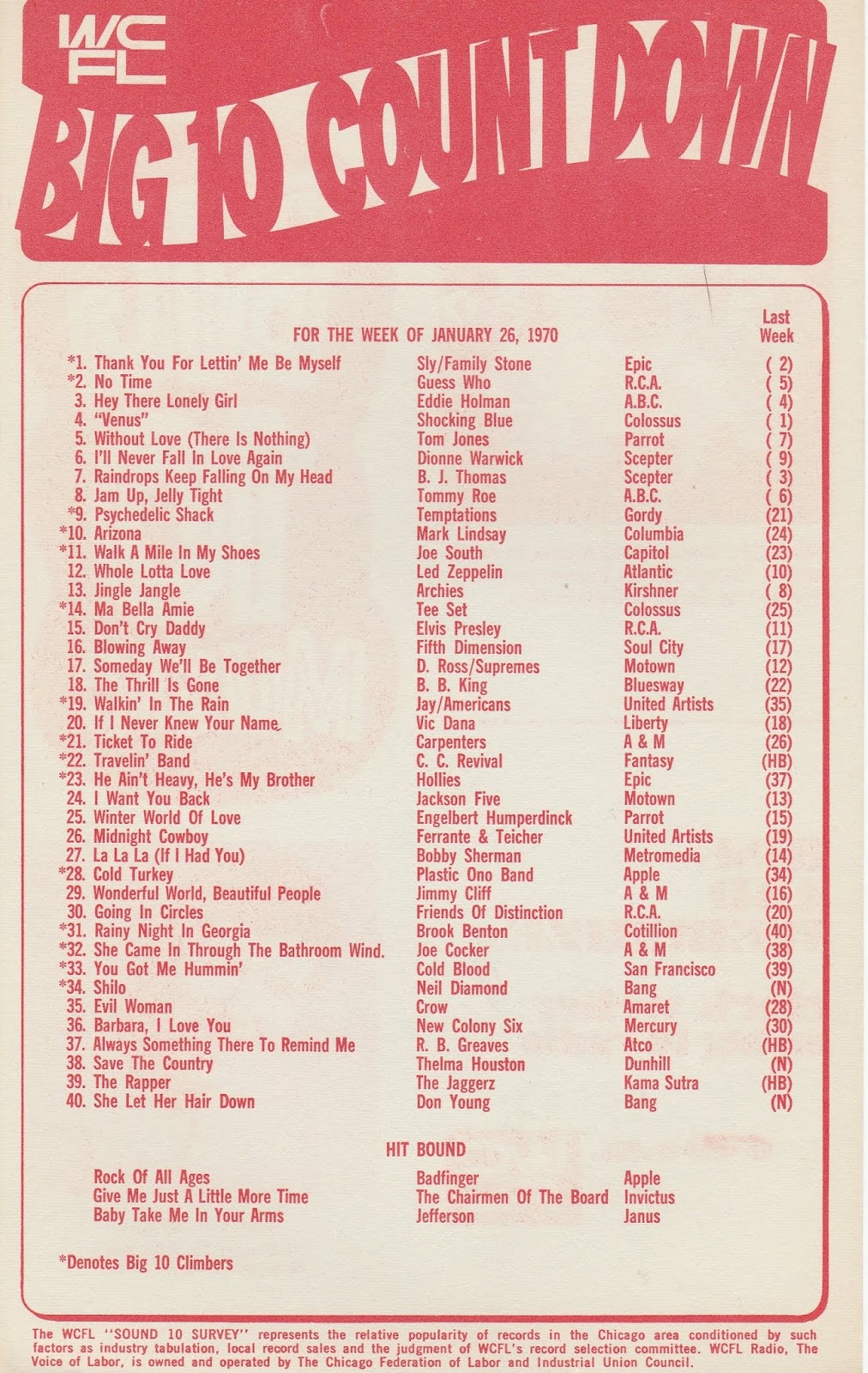 After their huge leap up the chart last week, it really comes as no surprise that Sly and the Family Stone have taken over the #1 Spot on this week's WCFL Survey.

"No Time" by The Guess Who, "Hey There Lonely Boy" by Eddie Holman, "Without Love" by Tom Jones and "I'll Never Fall In Love Again" by Dionne Warwick all continue to climb within this week's Top Ten, while big moves by The Temptations' "Psychedelic Shack" (#21 to #9) and Mark Lindsay's first solo hit, "Arizona" (#24 to #10) make their Top Ten debuts.

Joe South continues to climb with his latest hit, "Walk A Mile In My Shoes," up a dozen places from #23 to #11, placing him just outside The Top Ten.  (I'm sure he'll be there next week!)

After topping the chart with their hit "Venus," The Shocking Blue are joined this week by another group from The Netherlands making big leaps and bounds up the chart ... The Tee Set move from #25 to #14 this week with "Ma Belle Amie."  (Could this be the start of The Dutch Invasion?!?!)

Now that Neil Diamond has jumped ship from Bang Records to Uni, Bang is mining the vaults by releasing "Shilo" as a single.  (It'll actually do pretty well against Neil's newer stuff.)

And closing out The Top 40 is the Don Young version of "She Lets Her Hair Down."  This was another one of those songs used in a commercial and, although this record only had limited national success, it still seems to be a HUGE favorite with our Forgotten Hits Readers ... it has come up numerous times in the past.  (We tracked Don down for an interview many moons ago ... Donny Albano (real name) was a recording artists for many, many years ... but this is probably his best known hit ... especially among fanatics like us here in FH!


And one of this week's Hit Bound picks is by a new group signed to The Beatles' Apple Records, Badfinger.  It's actually the B-Side (and a great rocker) to their soon-to-be Top Three Hit "Come And Get It" ... but THIS is the side WCFL started playing first.  (Unbeknownst to us at the time, Badfinger was actually The Iveys, who scored a minor hit last year with "Maybe Tomorrow."  They had simply been renamed by John Lennon after a tune he had been working on called "Badfinger Boogie" ... which evolved into "With A Little Help From My Friends."  With the help of Paul McCartney's composition "Come And Get It" (a tune used in Ringo's "The Magic Christian" movie soundtrack), I guess you could say these guys had some pretty solid support behind them!  (George Harrison would go on to produce their "Straight Up" LP the following year ... and even had Badfinger join him onstage for The Concert For Bangla Desh ... thus completing the full cycle of Beatle-involvement!)

By the way, I'm only half joking about The Dutch Invasion ...

In rapid succession, Shocking Blue, The Tee Set and The George Baker Selection all scored Top 20 Hits on The American Charts.  All were from The Netherlands and signed to the Colossus record label.